What I learned from training with Carmen 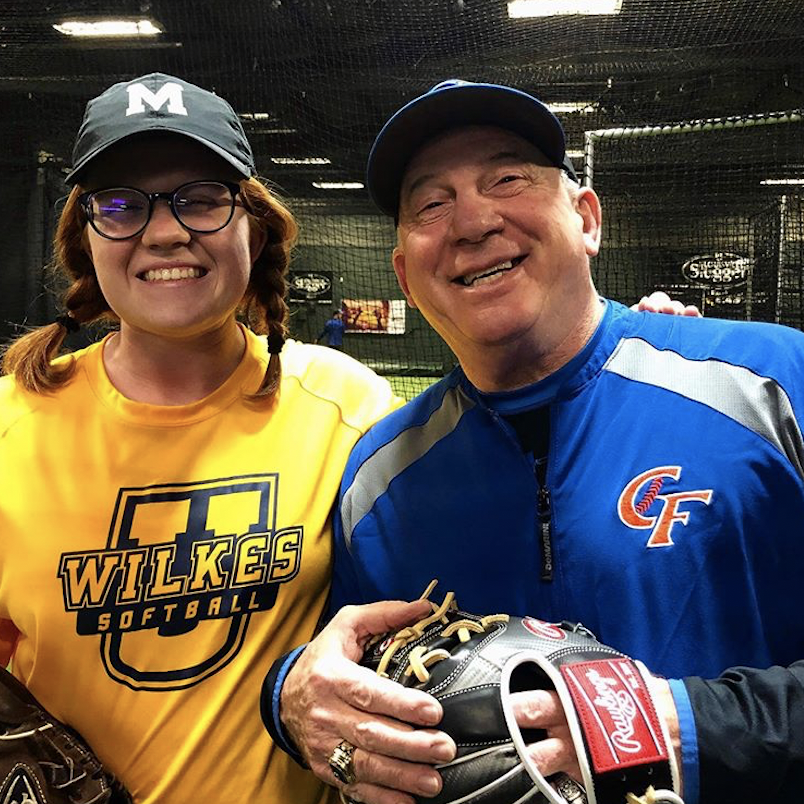 Victoria is a long-time trainee in the middle of her freshman year at Wilkes University. She plays on the varsity softball team and is studying communications. She graduated from Mechanicsburg High School this past spring and was named to the 2019 All-Sentinel Softball team as an Honorable Mention.

A small glimpse back in time: A high school freshmen attempting to hit. She has probably one of the weirdest swings you’ve ever seen. She is so early her body doesn’t understand how to organize itself. Her bat is at least ten years old. Her short red hair is stuffed under a camo hat.


Now imagine this: The same girl is now going into her freshman year of college. She still has a weird swing but a significantly better path to the ball. Her mental approach to the plate has done an almost complete 180-degree turn. How does this happen? How does a player make so much undoubted progress in such a short amount of time?


The answer? Taking lessons seriously and listening to coach Carmen.


If I sat down and wrote out everything I’ve learned from Carmen, it would probably end up being about as thick as War and Peace. So, I’ve broken down all the information I’ve gathered throughout the years into ten key points.


As an athlete, you must have an exceptional understanding of how your body moves. Identifying your strengths and weaknesses will give you an advantage over other athletes who only practice what they’re good at.


Great athletes don’t just settle for how everyone else performs the same task. They transform the sport to their strengths. Being uncomfortable isn’t always a bad thing. How will you ever know how far you can push yourself unless you try?


You can learn a ton of things just from simply watching and observing Major League Players in the same positions. Learn their pre-pitch movement. Look at their ready position. Examine how they approach a hard ground ball versus a lightly hit forehand. Recognizing these little things and experimenting with them in practice will greatly increase your athleticism. Watching videos can take a small amount of effort but it will help you tremendously.


Work hard in practice so that playing the game becomes easy compared to what you do during practice. Practice with a high level of concentration and effort and people will notice. Coaches will be more likely to remember your name and fellow players will have much more respect for you.


Don’t let outside forces such as big tests, family problems, relationships with others, or even injuries affect how you play. If you let these things come onto the field with you then you're adding extra pressure for yourself and your concentration is going to drop drastically. This idea also helps bring you back into the present if you made a mistake.


Schoolwork is more important than the game. By succeeding in the classroom you’ll be able to open more doors for yourself further down the road. Being diligent in the classroom as well as on the field will make you become a much more well-rounded person.


Even though it may look and feel as if you’re alone, you never are. Surround yourself with people who are going to push you to become not only a better ballplayer but also a better person. You don’t need a ton of friends, just the right ones.


Practice should be harder than game time. Take ground balls that are far to your left or right. Push yourself. Take the little things, like catch play, seriously. Too many athletes today practice lazy and it in turn translates to their game.


Don’t be afraid to ask for clarification. You’re not going to understand everything your coaches say. If you knew how to do everything already then there would be no need to practice. Coach Carmen has spent a lifetime dedicated to the sport. Asking people like him about his views on certain players or situations will give you a different perspective and understanding for the game.


We’re all humans. Some days things just aren’t going to be synced up. If you fielded every ground ball cleanly and hit every pitch out of the bark then you would already be in the MLB. Even the best athletes in the world mess up and make mistakes. What's going to separate the great athletes from the good ones is their ability to learn from the bad days and how quickly they can turn the page.