Our first coaches clinic for this fall and winter focused on building mindset, designing effective practices, and building early engagement in baseball. We were able to have an interactive discussion with coaches and players discussing these topics and common issues with them. It was a great opportunity to share ideas, stories, and pick up new things throughout the process to help improve how we train players.


The main theme that was brought up in the discussion was the importance of practice. It seems the current climate of youth baseball has shifted to a heavy dose of games with minimal practices. Teams will very commonly play six to 10 tournaments throughout the course of a summer playing three to six games per tournament, while only having one practice per week - sometimes none. We believe that this emphasis on games has hurt the development of young baseball players because they’ve taken precedence over practice time. While games do offer valuable lessons for development, they do not give kids the time or reps they need to improve their skills. Kids simply can’t develop off three ground balls and three at-bats per game - they need time to practice outside of their games.


It was unfortunate for us to hear how coaches in the central PA area were struggling to get practice time together for their kids. Not only were they having organizational constraints, but many kids were missing out on practices due to involvement other teams. A lot of kids today play on anywhere from two to four teams, creating a conflict of schedules and interests. This becomes a tough thing to manage especially since the kids who are involved in multiple teams are usually the better players. As a coach, you want to reward the kids who show up, work hard, and put the time in while some of their better counterparts are off playing in a tournament with another team. Being competitive is important to building early engagement in sports, but it should not come at the cost of playing kids who don’t show the same commitment to the team.


As a result, organizations lose players because they’re not playing as much or where they expect they should be. Instead of treating the team with respect, kids treat teams like a buffet picking and choosing what suits their liking. They skip out on practices for games with their other teams and expect to play when they don’t practice. This sense of entitlement is destroying youth baseball and is ruining organizations truly invested practicing and helping their kids develop.


To give an example of how is it in the United States, let’s look at the Dominican Republic. The Dominican accounts for 29.8 percent of all MLB players, but is 210 times smaller than the United States and has a population that is just 3 percent (10.77 million) of the U.S. (327.2 million). We also know that the Dominicans do not play baseball games as near as much as we do. In fact, they practice six days a week and play one. Here in the United States, we’ll practice one - maybe two - times per week and play three to six games on the weekend. Some teams won’t even practice during the season and will just play games. While Dominicans are practicing and working on their skills throughout the year, we’re doing the exact opposite and worrying about how much we play. This formula needs to change if we want to keep up with the development that’s going on down there.


This leads the main point that we started with at the clinic: You need to prioritize the long term development of your athletes. To understand this idea, see the excerpt below from Gerrit Cole’s coach Zak Doan: 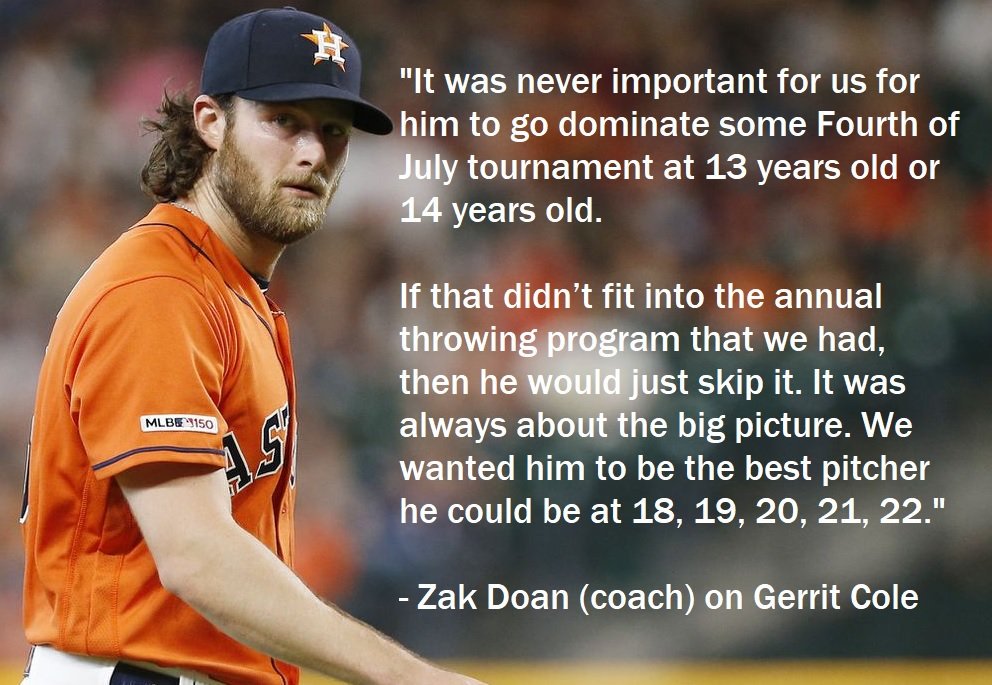 
Too often, we get caught up in selling out for tournaments trophies, performing in meaningless showcases, and prioritizing other opportunities to play games that just don’t matter in the long run. Kids play in summer tournaments, fall tournaments, and even winter tournaments that cost parents thousands of dollars. They’re rushed back from injuries and accumulate bullets on the mound that outweigh their ones in training. When the training/games scale is tipped towards games, the long term development of kids is put at serious risk.


As a result, we as coaches must plan for the long term with all of our athletes. We must put a premium on practice and make time during the week to get kids the reps they need to develop skills. We need to give kids opportunities to showcase their skills in games and let them play multiple positions. When they make mistakes, we need to use them as teaching points - not ceilings on their future development. We need to build confidence and give kids strategies to handle amount of failure involved in this game. A large majority of kids will quit baseball because the game becomes too hard, too fast, they’re pressured into playing, and they haven’t developed the skills needed to evolve with the complexities of the game. If you haven’t given your kids opportunities to work, learn, and build an early love for the game, they will quit when they get older and experience failure. Kids don’t need tournament trophies - they need confidence, a strong work ethic, and a resilient mindset that will fuel them far beyond their playing days.


The environment we create as a coach is imperative to the future development of our kids. This includes the things we emphasize and model, how we respond when they make mistakes, our ability to communicate, design engaging drills, challenge kids, and make them understand how much we care about them as humans. While this seems like a lot, coaching shouldn’t be overcomplicated. If anything, most of us try to coach too much. Instead of giving kids room to experiment and fail, we become overbearing and strip the freedom out of their game. Instead of developing competitors with instincts, we develop robots that operate by an instruction manual. Instruction manuals are great for concrete procedures, but they’re a horrible idea for complex activities that require constant adjustments (i.e. games).


If you want to develop gamers with instincts, the best thing you can do as a coach out of the way. Many of us learned how to play sports in our own backyard without any coaches or adults telling us what to do. We didn’t care where our arm was or what our front leg was doing - we just wanted to have fun and compete with our friends. We designed plays, created new pitches, made teams, enforced rules, and settled disputes all on our own. Today, kids don’t do this because adults do it for them - and it is a huge mistake. Giving kids a little bit of freedom is a huge competitive advantage for their long term development. Half the battle is just preventing well-intentioned people from coaching it out of them.


Off the field, the best thing you can do as a coach life-long learners. Encourage your kids to excel in the classroom and get the best grades possible. Get them to learn, read, and research on their own. Give kids notebooks and get them to journal about their practices and games. Model it yourself by reading books, sharing lessons you’ve learned, and giving them resources you think they would benefit from. Make learning “cool” on your team. If you can teach kids to love to learn and combine that with a relentless work ethic, you can develop some really special people. Great people make great ; great don’t necessarily make great people.


We will be going November 2 for our next baseball discussion with the focus being on hitting. We hope to see you all out there!


Feel free to reach out with any questions, concerns, or thoughts. Keep learning and growing.